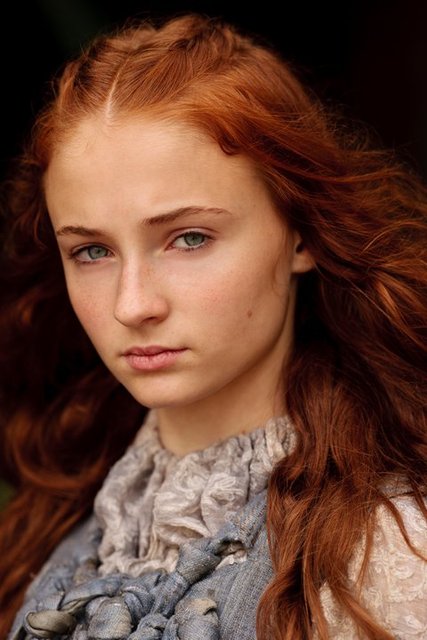 All my feminist friends have been making these fun little dolls lately and it is so strangely relaxing and wonderful. Seriously, revert back to your twelve-year-old self and play dress up for fifteen minutes.

The New York Times recently published an exposé of Florida State University’s failure to pursue justice for a survivor of rape. It’s a long read but well worth your time. It focuses on how colleges tend to protect their star athletes (the alleged rapist, Jameis Winson, is FSU’s star football player) rather than care for survivors. According to the article, the lead detective for the rape case didn’t write a report on the crime until two months after the crime was reported. According to the New York Times there was “virtually no investigation at all, either by the police or the university.”

I have a deep love for Sansa Stark, the long suffering eldest Stark daughter. This is partly because so many seem to hate her, calling her “whiny” or “boring.” Sophie Turner, the actress who plays Sansa recently gave an interview (it’s filled with spoilers, so watch out!) and responds to the hate many have for her character:

Yeah! People don’t like her because it’s the making of her, right now. When she, sometime soon in the future, becomes this person that she’s been kind of building up to, for the past three seasons, now four, then people will really begin to root for her. I think even the audience doesn’t realize she’s such a dark horse. If she acted badass and tried to kill everyone there, she would be dead by now! She’s so intelligent, and I can’t stress that enough. Courtesy is a lady’s armor. She’s using her courtesy to deceive people, and she’s using her former self as a facade, and it works so much to her advantage, because people still think she’s this naive, vulnerable, little girl, and she’s really not. She knows exactly what she’s doing. She knows what game she’s playing! And no one else does. And she’s learned from the best — Cersei, Margaery, Tyrion, Littlefinger, even Joffrey. She’s learned so much from these people, and they don’t even realize it. They’re unwittingly feeding her to become this great kind of manipulator. King’s Landing can either make or break a person, and in Sansa’s case, it’s making her.

SPARK Movement’s Ty Slobe writes beautifully about why intergenerational feminism matters and why every organization should make an effort to bring young activists into their work.

Being a girl is awesome at all ages, and it’s super unfortunate that teenagers and young girls in general are so often left out of feminist conversations. Being in college doesn’t make you any better or smarter than teenagers; even being a CEO of some Fortune 500 company doesn’t make you any better or smarter than teenagers. Teenage girls don’t live in Girl World that’s contained in the hallways of high schools and in the blogosphere. They live in the Real World, they’re part of the Real World. Their perspectives are as important as those of women of all ages, if not more important because they’re among the most marginalized. Girls deserve spaces to express themselves in the Real World too.

Alice Wilder is our Social Media Intern. She works on a variety of outreach projects for education and advocacy.