Since California established their affirmative consent law in September 2014, there has been a lot of debate around this issue. The purpose of these laws is to create a “yes means yes” standard for consent to sexual activity on college campuses. This is a departure from the traditional view of consent in which “no means no.” In the “no means no” version of consent, communication is limited and sexual activity continues until someone says no or acts to make it stop. Clearly, this conceptualization of consent is problematic because it puts the impetus on the potential victim of sexual assault to stop or prevent the assault from occurring. “No means no” also makes it much easier to blame the victim and excuse the perpetrator with the all-too-familiar question, “Well, did they say no?”

Affirmative consent laws try to change the conversation on consent. No longer are we looking for the absence of a no, but the presence of a yes.  The idea is to open up communication around sexual activity and to put the responsibility on all people involved in a sexual encounter to check in with their partner(s) at every step of the way to make sure that everyone is comfortable.

Unfortunately, many critics have called this approach to consent ridiculous, unsexy, and a way to criminalize all people because, according to them, “no one engages in sexual relationships like this.” Critics are also afraid that affirmative consent policies will increase the number of false reports of sexual assault from people who are seeking revenge. The idea of affirmative consent seems to be misconstrued as tyrannical policies that will punish people for engaging in completely consensual sexual activity just because no one uttered the word “yes.” Well, this is just silly. 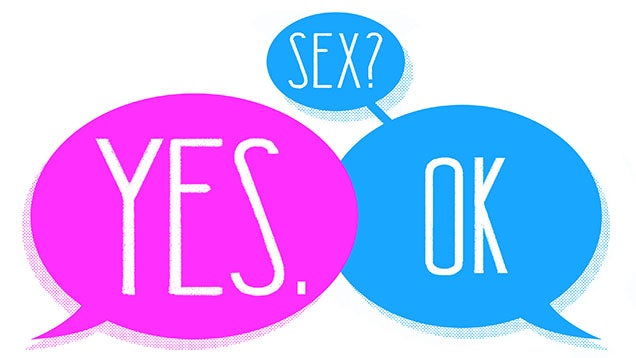 First, what could be more sexy that a partner who is willing to check in and see if you are actually enjoying a sexual experience? The hot debate about consent ignores the fact that good communication, while a great way to protect yourself and others, could actually make sexual experiences better and more enjoyable for those involved!

Second, affirmative consent laws are not criminal laws. They provide guidelines for how sexual assault policies on college campuses are written and implemented. If someone were to be found in violation of a campus policy, their sanctions (i.e., probation, suspension, expulsion, etc.) would be decided and carried out through the University – not through a criminal court.

Third, rape and sexual assault have the same false reporting rate of any violent crime, which is generally estimated at somewhere between 2-8%. In fact, it’s not that there are a lot of false reports, it’s that rape and sexual assault are widely unreported. One study found that fewer than 5% of sexual assaults were reported to law enforcement. Many survivors don’t want to report because they fear victim-blaming, shame, and social ostracizing that are all too common in our society. Changing the operational definition of consent does not change someone’s experience of sexual trauma.

Finally, if sexual activity is completely consensual, there would be no reason for someone to report it as a sexual assault. Therefore, those engaging in consensual sexual activity have nothing to fear. The only people who should fear affirmative consent are perpetrators.

Affirmative consent is a beneficial practice for all! Don’t believe me? Just ask this 4-year-old!

HELP MAKE THE NORTH CAROLINA AFFIRMATIVE CONSENT LAW A REALITY! Contact your North Carolina Legislator to voice your support of this bill! For more information about the progress of affirmative consent laws, check out this website.

Rebecca Swofford is one of the Center’s MSW (Master of Social Work) interns from UNC-Chapel Hill. She assists the client services team with providing counseling, resources, and outreach to survivors in our community.