In February, actress Anne Hathaway won a Best Supporting Actress Oscar for her portrayal of Fantine in Les Mise

rables. In the story, Fantine is a single mother forced by economic necessity into prostitution. In interviews promoting the film, Hathaway spoke frequently of finding inspiration for the role by researching the reality of modern-day sex slavery. As she told Word & Film’s Tony Phillips, “[…] I came to the realization that I had been thinking about Fantine as someone who lived in the past – but she doesn’t. She’s living in New York City right now. She’s probably less than a block away.” Hathaway’s words, and her portrayal of Fantine, speak not only to the reality of contemporary human trafficking, but also to its insidious presence right in all of our own backyards. In fact, North Carolina ranks among the top 8 states for human trafficking in the United States.

Human trafficking is often misunderstood as an issue that exclusively impacts foreign nationals. While international trafficking and trafficking of foreign nationals is undeniably a huge issue, it’s only one piece of the puzzle. Trafficking victims are very often U.S. citizens who are forced into sex slavery by economic necessity, abusive home situations, or any number of other circumstances. In order for a situation to be legally classified as “human trafficking,” it does not need to involve movement across borders, smuggling, or movement of any kind. Rather, human trafficking is defined as any commercial exchange of sex or labor that involves force, fraud, or coercion (though in the case of sex trafficking of minors, force, fraud, and coercion are not necessary). This definition includes pimp-controlled prostitution.

END_OF_DOCUMENT_TOKEN_TO_BE_REPLACED

On a daily basis we are inundated with media messages that make not-so-subtle suggestions on how we should live our lives: how we should look, what we should eat, who we should surround ourselves with, and more. More often than not, these messages are harmful by promoting unattainable standards. And if they are harmful for adults, can you imagine what the effects these messages have on our youth, especially young girls?

Here at the Center, we believe in helping young girls foster a healthy and positive sexual identity because in doing so, they are empowered to expect and demand relationships free from coercion, disrespect, and violence. But, in order to encourage this, we need to help our girls build resilience against harmful media messages that promote the objectification and sexualization of young girls.

It is no easy task to just ignore the media and all the pressures that come with it. But if we want our society to change, and if we want our girls to believe they are wonderful just as they are, then we need to provide women and girls with skills to recognize and reject harmful media messages.

About-Face and the NOW Foundation’s Love Your Body campaign provide great ways to tackle harmful media consumption. Here are a few of my personal favorites:

END_OF_DOCUMENT_TOKEN_TO_BE_REPLACED

Over the past two months, members of our community have been disheartened to read about the allegations surrounding the handling of sexual assault cases at UNC. In the wake of the 2011 Title IX Dear Colleague Letter, we have watched similar media stories about universities across the nation, but as with anything, it is often more difficult to reconcile challenges that are close to home. In the coming months there may be more publicity, more questions, and possibly even more disappointment, but there is also the opportunity for a strategic community response to sexual violence.

On a daily basis, our staff and volunteers witness the courage of survivors who share the devastation that sexual violence has had on their lives. While survivors come to the Center seeking help in their recovery process, they come first and foremost baring their deepest secrets to someone who will believe them. Disclosure can take a tremendous amount of courage for anyone, and for our community’s college students, we find that they are doubly fearful of being excluded from what equates to a new sense of family. Statistics show that most violent crimes, including rape and sexual assault, are committed by someone the victim knows. Students often have to worry about how their friends and acquaintances will react if they disclose assault perpetrated by someone within their social circle.

END_OF_DOCUMENT_TOKEN_TO_BE_REPLACED

At the start of 2013, staff at the Center fielded many questions about potential repercussions when the 112th Congress did not reauthorize VAWA. Just one month later, we find the 113th Congress committed to action. Last week, Senate Bill 47 passed to reauthorize the landmark Violence Against Women Act sponsored by Senators Patrick Leahy (D-VT) and Michael Crapo (R-ID). And now, this bill is once again in the hands of the House of Representatives.

The Senate-approved bill is very similar to the bipartisan legislation introduced by Senators Leahy and Crapo last Congress and would improve VAWA programs and strengthen protections for all victims of violence. It includes many important improvements, such as addressing the criminal justice response to sexual assault, domestic violence homicides, housing needs, and campus victimization, all of which were included in legislation last year.

The current Senate bill also includes enhanced protections for tribal, LGBT, and immigrant victims. These extra provisions were identified as critical priorities by advocates across the country and received bipartisan support both last year and this year in the Senate.

END_OF_DOCUMENT_TOKEN_TO_BE_REPLACED

“Why were you drinking?”
“What were you wearing?”
“Why did you leave with him?”
“How come you don’t have any bruises?”
“Didn’t you know what would happen?”

These are some of the questions that are commonly asked of survivors seeking help after a sexual assault. And while there are many reasons that someone may not want to report an assault, victim-blaming questions such as those are one of the main factors that prevent survivors from coming forward.

The repercussions of speaking out can be traumatic. Victim-blaming, public shaming and humiliation, fear of retaliation from one’s attacker, and not being believed are some of the many reasons why survivors do not report their assault to the police or seek help from friends and family members.

Additionally, statistics have shown that most assaults occur between people who know each other, raising a whole new set of concerns. The survivor may care for their attacker and not want to get them in trouble. They may fear being ostracized by their social group if they accuse a friend of rape. Friends not wishing to have “drama” in the group may ignore or write off an assault, leaving the survivor without any support.

END_OF_DOCUMENT_TOKEN_TO_BE_REPLACED

Sometimes I feel like my job is just too much fun. I get to spend a lot of time visiting the hallways of adolescence and hanging out with teenagers, talking about one of their (and my) favorite topics of conversation: flirting. And I learn new things every day. Like when I asked 200 seventh graders to describe what it feels like to be flirted with. Best answer? TWINKLY.

Teenagers are awesome. If you ask the right questions, they have a wealth of wisdom about what healthy sexuality and healthy relationships look like. This is honestly amazing considering the images of sex and relationships that have saturated the media they’ve grown up consuming. But these negative messages in the media still take their toll. It’s important to remember that while they may know the right answers when they are asked in the classroom, as many as 1 in 3 teens experience dating violence. The reality of teen dating violence in America reflects a need for more questions, more conversations, and more awareness.

February is Teen Dating Violence Awareness Month, and here’s what you can do this month to help us end a national epidemic:

END_OF_DOCUMENT_TOKEN_TO_BE_REPLACED

In 2004, January was declared National Stalking Awareness Month (NSAM) by the Stalking Resource Center, National Center for Victims of Crime, and the Office on Violence Against Women of the U.S. Department of Justice. 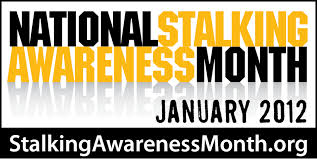 These agencies defined stalking as “a course of conduct directed at a specific person that involves repeated visual or physical proximity, nonconsensual communication, or verbal, written or implied threats or a combination thereof that would cause a reasonable person to fear.”

The stalker’s purpose is to control and scare the victim, sometimes with the intention of keeping them in a relationship with the stalker. Stalking is about POWER and CONTROL.

END_OF_DOCUMENT_TOKEN_TO_BE_REPLACED

Some victims are forced to work without pay. How many slaves work for you? The clothes, gadgets, and food we buy are often produced by forced labor. Some victims are forced into sexual slavery, being forced to prostitute themselves and earn money for their pimps. Trafficking knows no bounds when it comes to race, nationality, gender, socioeconomic status, or even age. Preliminary research conducted by EPCAT International shows that about 100,000 – 300,000 children in the U.S. are prostituted at any given time.

The overall scope of human trafficking is mind-boggling: Free the Slaves, a nonprofit based in Washington, DC, estimates there are up to 27 million active slaves in the world today.

Signs Someone Is a Victim of Trafficking…

END_OF_DOCUMENT_TOKEN_TO_BE_REPLACED

Aside from presents, way too much food, and time spent with loved ones, your holiday season was undoubtedly filled with debates about Congress and the looming “fiscal cliff”. If your family is anything like mine, I am sure those were very lively dinner table discussions. But with the fiscal cliff dust settling, you may not have heard that Congress failed to reauthorize the Violence Against Women Act.

Since 1994, the landmark Violence Against Women Act (VAWA), has been charged with improving our nation’s ability to prevent and respond to domestic violence, dating violence, sexual assault, and stalking. Nineteen years ago, then-Senator Joe Biden pushed Congress to promote a national strategy that would protect women from violent crimes and hold offenders accountable, in what is now a very historic piece of legislation.
END_OF_DOCUMENT_TOKEN_TO_BE_REPLACED

Little tots with their eyes all aglow will find it hard to sleep this holiday season. Kids all over the place are up in arms over some gender injustice in Toyland.

Earlier this month, McKenna Pope, a 13-year-old from New Jersey, started a petition on Change.org. Her goal? For toy company Hasbro to make her 4-year-old brother’s culinary dreams come true and lighten up a little on their gender-specific marketing of the Easy Bake Oven. In her petition, Pope writes: “I have always been adamantly against anything that promotes specific roles in society for men and women, and having grown up with toys produced by the Hasbro Corporation, it truly saddens me that such a successful business would resort to conforming to society’s views on what boys do and what girls do.”

What?! Where did this kid come from?